Matrioshka diamond is a world premiere: a diamond discovered inside another diamond

A hollow diamond with a second diamond in its core has been extracted from the Nakyn deposit in Yakutia, in the Russian Far East, Alrosa, the world’s leading diamond mining company, announced. “To our knowledge, such diamonds have never been encountered in history,” said Oleg Kovaltchouk, Alrosa’s deputy director of innovation work.

“The most amazing thing is the cavity inside the diamond,” says Oleg Kovalchuk. We have two hypotheses about its formation. A mineral in the mantle may have been captured by the diamond during its growth and then dissolved on the Earth’s surface. According to a second version, a polycrystalline diamond layer formed inside the diamond due to ultra-fast growth, and more aggressive mantle processes then dissolved it. It is really a unique creation of nature, especially since nature does not like emptiness, insists the specialist. Usually, minerals are replaced by others without cavity formation.

“Due to the presence of the dissolved layer, one diamond began to move freely inside another — just like a Matrioshka nesting doll.” 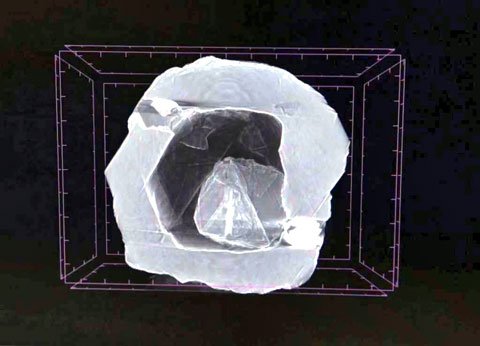 The diamond will now be sent to the Gemological Institute of America for further analysis. Researchers haven’t estimated its worth yet — it will be difficult due to the gem’s rarity, they say.