Sylvain Goldberg on the alpha and omega of the diamond industry

People discovered the oldest diamonds in the delta of the Golconda River in India. Of course the exact date of this find is unknown. A Sanskrit accounting book from the 4th century B. C. reveals that traders used diamonds as a trading commodity.
Rich people such as emperors, kings, sultans and monarchs possessed these rare and highly prized items. The hardness and luster of diamonds made them popular as amulets. It soon became a symbol of male qualities such as courage.

From carbon to diamond

Carbon changes into diamond in the depths of the earth under high pressure and temperature. But this process might take millions of years. Under extreme pressure and heat, the carbon atoms adopt a different bonding structure. Instead of the conventional graphite rings, the carbon atoms squeeze together in a huge 3-dimensional network of interlocking tetrahedra.

Ancient Egyptians believed in a magical, almost mystical, power of diamonds. Dusting one’s fingertips with diamond powder was supposedly a very efficient manner in which to ensure one’s love forever. Alexander the Great probably brought diamonds to Europe. Europeans saw them as rarities with healing properties. The ancient Greek believed diamonds to be tears of gods. The first uncut diamond appeared in Rome sometime between the 1st and 3rd century.

From Venice to Bruges

Venice was the trading capital of the West at that time. Cities from all over Northern Europe established trading relationships with Venetian merchants. Diamonds thus reached Bruges in Belgium. Bruges soon also became a diamond processing place. There is where expert polishers invented the secret techniques of diamond cutting. The main function of transforming diamonds was to get rid of the superficial irregularities and impurities. Later, they invented the steel pad covered with diamond dust. This led to the so called ‘table’ cuts such as the shape of a four-sided figure or the rose cut.

When Vasco da Gama discovered a direct sea route to India in 1498, diamond trading shifted from Venice to Lisbon. The city of Antwerp rose to prominence in the diamond trade at the end of the 14th century.

From male qualities to a symbol of love

The first concept of bequeathing a diamond as a exclusive symbol of love came from the 15th century. Archduke Maximilian I of Austria gave Mary of Burgundy a diamond ring as an engagement ring in 1477 and established that tradition.

The Antwerp diamond cutters were highly regarded and in the 17th century other shapes appeared such as oval, drops and marquises. But, by the end of the 18th century the Indian mines ran empty and Antwerp lost some of it’s diamond related prosperity. It is only in the second part of the 19th century that an American, Henry Morse, discovered the first modern brilliant cut. Marcel Tolkowski perfected, mathematically substantiated and formally described it in 1919. Most still consider him to be the creator of the modern brilliant cut.

At the end of the 19th century the owners of a farm in Kimberley in South Africa permitted Dutch diamond explorers to pursue diamonds on their land. It turned out that the land of the De Beers brothers was very rich in diamonds. They sold their farm and went on to live elsewhere. 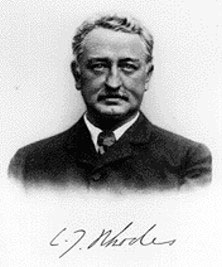 In 1888 Cecil J. Rhodes and brothers Harry and Barney Barnato established De Beers Consolidated Mines Limited. Through an intricate web of companies and interactions between them, De Beers gained total market control and mastered the alpha and omega of the entire industry. The gradual depletion of the diamond mines of South Africa and the opening of more mines in for instance Russia, Canada and Australia gradually dispossessed De Beers of that total market control.

This short text explains the four C’s:  cut, color, clarity, and carat weight. These are the most important characteristics of buying a diamond.

The cut is actually a diamond’s most important characteristic. It has the greatest overall impact on a diamond’s allure. It’s the cut that rules what we broadly think of as glimmer, vitality or sparkle. 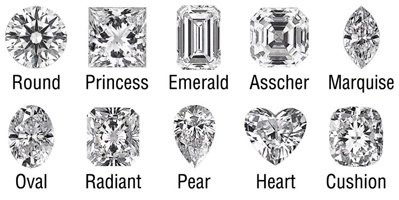 Color actually indicated a diamond’s lack of color, ie the whiteness of a diamond. A color grade of D is the highest possible, while Z is the lowest. As a matter diamond color graders base their evaluation on the absence of color. The less color a diamond has, the higher its color grade. After the cut, diamond professionals broadly consider the color to be the second most important characteristic when selecting a diamond. Because the human eye tends to distinguish a diamond’s sparkle (light performance) first, and color second.

Clarity is a measure of the number and size of the tiny imperfections that occur in almost all diamonds.
Many of these imperfections are microscopic, and do not affect a diamond’s beauty in any discernible way.
Much is made of a diamond’s clarity, but of the Four Cs, it is the easiest to understand, and, according to many experts, generally has the least impact on a diamond’s appearance. 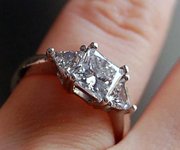 Carat is a measure of a diamond’s weight, but if you take it on it’s own it may not accurately reflect a diamond’s size.
Consumers tend to appraise the size of a diamond by viewing it from the top. That is how we most often view diamonds when presented to us set into a ring.

And it is the reason why carat weight needs to be viewed in association with two other criteria: the distance in millimeters across the top of the diamond and the diamond’s cut grade.

“I don’t feel pressure in a negative way. I like pressure. I feel excitement and calm at the same time. No pressure, no diamonds.” 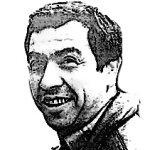 Sylvain Goldberg – knows the alpha and omega of diamonds