Blue diamonds outperformed the rest of the fancy-color market in the first quarter, as high demand for the rare stones continued to drive prices, according to the Fancy Color Research Foundation (FCRF).

“Highly coveted fancy intense and vivid blues are challenging to find in the market, while interest and demand for these categories continue to grow,” said Eden Rachminov, chairman of the FCRF’s advisory board. “This trend is likely to continue well into 2017 as owners react to supply shortages with price hikes.”

Prices of yellow fancy-color diamonds slipped 0.2% compared with the fourth quarter of 2016 and fell 2.5% year on year. Their pink counterparts also dipped 0.2% from the preceding period but crept up 0.8% from a year earlier.

Across all color segments, diamonds labeled “fancy intense” or “fancy vivid” gained value, partly offset by declines in diamonds that were just “fancy,” the foundation explained.

Colored diamonds are much like snowflakes – a natural phenomenon of which no two are completely alike. Each boasts a unique shade and set of characteristics, but they do have two things in common: a stunning appearance, and a remarkable rarity.

Among the most rare are blue diamonds. In fact, if we’ll divide the rarity scale of colored diamonds into four groups, blue diamonds will be at the tip of the second rarest – more rare than pinks but less than red, violet and purple. Though we need to remember that not all blue diamonds are equally rare, the strongest the color, the more rare the diamond.

There’s a scientific cause for appearance of colors in diamonds: the presence of an impurity. This is also true for blue diamonds.

In “The Fancy Color Diamond Book,” they explain that while a diamond is forming, boron particles can become trapped inside the crystal lattice. It is this substance that absorbs yellow light, thus reflecting a blue color.

Like any other colored diamond, blue stones can exhibit a wide range of hues, from pale shades that mimic a clear sky, to steel blue, to an intense deep sea. It’s common to see blue diamonds listed with more specific names regarding their shade, such as baby, royal, navy or midnight.

Where do Blue Diamonds Come From?

The same diamond that was just polished into a 12 carat vivid blue named the blue moon.

While it is less common to discover these stones in other locations, they have been unearthed elsewhere, including the Golconda mine in India and the Lesteng mine in Lesotho. It’s interesting to note that blue diamonds only typically fluoresce if they were found in Zimbabwe, according to The NCDIA.

In terms of the polishing of fancy blue diamonds, the NCDIA reported that the Israeli market is at the forefront of the manufacturing, especially for polished stones up to 3 carats. Blue gems weighing more are typically manufactured in New York or Antwerp.

There’s no doubt that the Hope Diamond is the most famous blue stone in history (and probably most famous diamond in the world). Jeweller Magazine noted that this fancy dark grayish blue gem, which weighed in at a astounding 45.52 carats, has a long and complex story attached to it, including a number of deaths that have led many to believe it’s cursed. 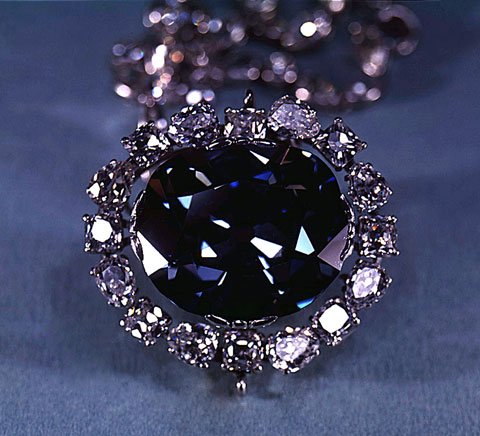 Famous jeweler Harry Winston bought the Hope, but only owned it for a day before donating it to the Smithsonian Natural History Museum.

Other impressive finds have popped up throughout the years. For example, The Star of Josephine, a 7.0-carat cushion-cut fancy vivid blue and internally flawless diamond that was unearthed in 2008, sold at a Sotheby’s auction just one year later for $9.49 million – or at $1.35 million per carat. It set a world record at the time for the highest price per carat for any gemstone at auction.

The 42.92-carat pear-shaped Tereschenko diamond is the second largest fancy blue stone in the world after the Hope.
Of course, one can’t discuss blue diamonds without citing the famous Wittelsbach-Graff, which was discovered sometime in the mid-1600s and after being bought, recut and repolished by Laurence Graff, weighs a notable 31.06 carats. It fetched an impressive $24.3 million in 2011. 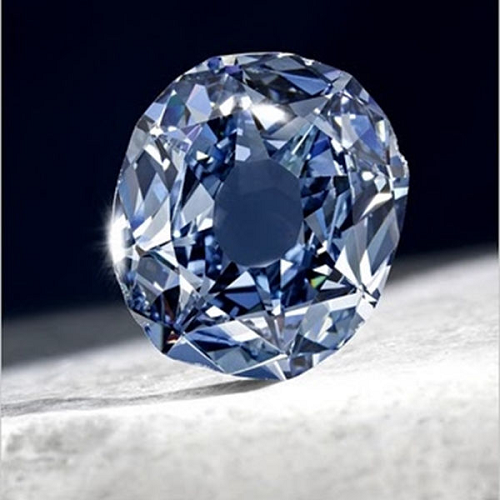 More recently, though, a 29.6-carat rough blue diamond from Petra sold for a staggering $25.6 million – nearly $1 million per carat. At a Christie’s auction during 2014, an Internally Flawless vivid blue pear-shaped stone aptly named The Perfect Blue caused quite a stir – and raked in more than $24.24 million, meaning it almost beat out the Wittelsbach Diamond. Harry Winston, the winning bidder, renamed it the Winston Blue. 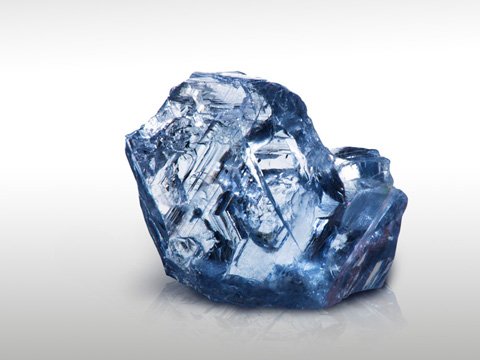