The last Emperor of Vietnam’s Rolex watch sells for over US$5m in Geneva. 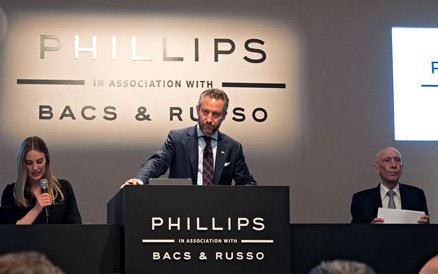 But in the end it was down to just two anonymous bidders, represented by Joey Luk of Phillips Hong Kong and Paul Maudsley of the auctioneer’s London office.

Finally it was clinched by Maudsley’s client, with a hammer price of SFr4.3m that was met with prolonged applause in the room.

Notably, Maudsley also represented the winning bidder for the Patek Philippe ref. 1518 in steel that sold last year for SFr11m.

One of a kind Rolex

The “Bao Dai”, a Rolex triple calendar wristwatch, is a rare timepiece in itself – the diamond-set dial is probably one of a kind – but its allure has been infinitely boosted by its provenance.

The Rolex gets its name from Bảo Đại of the Nguyen dynasty, the Emperor of Vietnam from 1926 to 1955. Acquired by the Emperor in Geneva while he was in the Swiss city for peace talks to end the Indochina conflict, the wristwatch is one of many tasteful objects the erstwhile sovereign owned, a trove that included a custom body Ferrari 375 MM Spyder.

More on Bảo Đại, the former owner of this unique Rolex

Bảo Đại, born Nguyễn Phúc Vĩnh Thụy, was the 13th and final emperor of the Nguyễn Dynasty, which was the last ruling family of Vietnam. From 1926 to 1945, he was emperor of Annam. During this period, Annam was a protectorate within French Indochina, covering the central two-thirds of the present-day Vietnam. Bảo Đại ascended the throne in 1932.

The Japanese ousted the Vichy-French administration in March 1945 and then ruled through Bảo Đại. At this time, he renamed his country “Vietnam”. He abdicated in August 1945 when Japan surrendered. From 1949 until 1955, Bảo Đại was the chief of state of the State of Vietnam (South Vietnam). Bảo Đại was criticized for being too closely associated with France and spending much of his time outside of Vietnam. Prime Minister Ngô Đình Diệm eventually ousted him in a fraudulent referendum vote in 1955.
It has been widely held that Vietminh or Ho Chi Minh founded the independent Democratic Republic of Vietnam alone. However, Stanley Karnow in ‘Vietnam: A History’ argued that “Nothing has reinforced the Vietminh cause more than the mercurial Bao Dai’s decision to abdicate. For his gesture conferred the ‘mandate of heaven’ on Ho, giving him the legitimacy that, in Vietnamese eyes, had traditionally resided in the emperor.”

Return to power and Indochina War

In 1940, during the second World War, coinciding with their ally Germany’s invasion of France, the Japanese invaded French Indochina. While they did not eject the French colonial administration, the occupation authorities directed policy from behind the scenes in a parallel of Vichy France.

The Japanese promised not to interfere with the court at Huế, but in 1945, after ousting the French, coerced Bảo Đại into declaring Vietnamese independence from France as a member of Japan’s “Greater East Asia Co-Prosperity Sphere”; the country then became the Empire of Vietnam.

The Japanese had a Vietnamese pretender, Prince Cường Để, waiting to take power in case the new emperor’s “elimination” was required. Japan surrendered to the Allies in August 1945, and the Viet Minh under the leadership of Hồ Chí Minh aimed to take power in a free Vietnam.

Due to his recent Japanese associations, Hồ was able to persuade Bảo Đại to abdicate on 25 August 1945, handing power over to the Việt Minh — an event which greatly enhanced Hồ’s legitimacy in the eyes of the Vietnamese people. Bảo Đại was appointed “supreme advisor” to Hồ’s Democratic Republic of Vietnam in Hanoi, which asserted its independence on 2 September 1945, but was ousted by the French in November 1946.

As Vietnam descended into armed conflict — rival factions clashed with each other and also with the remaining French — Bảo Đại left Vietnam after a year in his “advisory” role, living in both Hong Kong and China.

The French persuaded him to return in 1949 to serve as “head of state” (quốc trưởng), not as “emperor” (Hoàng Đế). He soon returned to France, however, and showed little interest in the affairs of his own country when his own personal interests were not directly involved.
The communist victory in China in 1949 led to a revival of the fortunes of the Việt Minh. The United States extended diplomatic recognition to Bảo Đại’s government in March 1950, soon after communist nations recognized Hồ’s government. The outbreak of the Korean War in June led to U.S. military aid and active support of the French war effort in Indochina, now seen as anti-communist rather than colonialist.
But the war between the French colonial forces and the Việt Minh continued, ending in 1954 shortly after a major victory for the Việt Minh at Điện Biên Phủ. The 1954 peace deal between the French and the Việt Minh, known as the Geneva Accords, involved a partition of the country into northern and southern zones. Bảo Đại moved to Paris, but remained “Head of State” of South Vietnam, appointing Ngô Đình Diệm as his prime minister.

You can read more on Bảo Đại’s life here.

The Rolex triple calendar with moonphase in yellow gold, sold for a world record price, is one of three black dial models known to exist with diamond markers, the auction house said in a statement. Of the three, the Bao Dai Rolex, is the only one to feature diamond markers at the even hours.