Peter Franck’s thriller ‘For urgent reasons‘ (‘Om dringende reden’ in Dutch) is based upon two worlds, that of the diamond trade and that of labour law. A somewhat strange combination.

“Yes, labour law is a legacy of my studies in Political Science, in which I have studied this subject. In this book I saw an excellent opportunity to bring together two completely different worlds, which suddenly gave a classic thriller elements 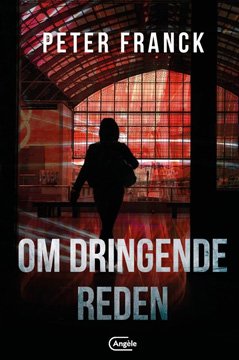 of the legal thriller as well. On the one hand there is the legal interplay between an employer and an employee. On the other hand, there is the story of the same employee, who by an incredible coincidence ended up in the world of diamonds and who falls from one surprise into the next.

A stroke of chance that is based on true facts, by the way. I myself have been active in the diamond world for years, and I remember the time when certificates were still being photocopied in order to be issued to a colleague. Nowadays that is largely done digitally. But at the time, certificates and diamonds often formed a physical package and if there is a moment of absent-mindedness when unpacking, this can have major consequences. My biggest problem was that I had to try to get this incident on paper as credibly as possible, knowing that a lot of readers could hardly believe it. But it was too good a story to be left out.

In this thriller, I depict the Antwerp diamond world as it really is and I comment on the evolution it is undergoing. Without avoiding a few unsavory practices from the past. The vast majority of Antwerp diamond traders work completely in good faith and they themselves are asking for total transparency. It is only a very small minority that still thinks they can put themselves above the law. I do not deny that there have been abuses in the past, I also refer to this in my book, but above all I see a positive evolution. In my story, we are talking about a highly individual case of diamond smuggling, in which a few shady figures are involved.

It remains to be seen whether you will ever be able to eradicate these kinds of initiatives altogether. But I have the strongest impression that the AWDC (Antwerp World Diamond Centre) as an umbrella organisation does everything in its power to put a stop to rogue practices. All those involved are well aware that flawed transactions, however profitable they may be, will have a detrimental effect on the sector in the long term. The regulations have been tightened up and there is more consultation with the government. In addition, the black market is increasingly becoming a peripheral phenomenon. I think, as do many others, that we are really on the right track. That, too, is a common thread in my book. Antwerp still has a good reputation worldwide in the diamond sector. We would, of course, like to keep it that way.

It is not the case that a kind of police force has been created here to monitor what diamond traders do in their spare time. But I did consult with the AWDC on my own initiative. They also saw that there were a few sensitive passages in the book, but they dealt with them in a very mature way. There’s no point in denying things that have passed through the media. Sectors that involve large flows of money will always be talked about.”

If you read Dutch, you can buy this thriller through a number of book shops, such as Bol.com for instance.

Other thrillers set in the Antwerp diamond world

Probably the most famous thriller set in the Antwerp diamond world is ‘Diamant’ by Jef Geeraerts.

‘Diamant’ is a fascinating and well-documented crime novel about the diamond trade and smuggling. A clan of illegal excavators finds a large rough diamond in the Zairean province of Western Kasai.  A specialist, Zephyrin Kalondo, is sent to Antwerp to sell it. After a scuffle, Zephyrin Kalondo is shot in a luxury hotel in Antwerp.

Robbe Parain, adjutant to the Antwerp BOB, is at the scene for a few minutes ahead of his colleagues. In the jacket pocket of the dead Kalondo he finds a lot of extremely valuable diamonds. There are no witnesses. The temptation is too great.
For Parain, an exciting journey begins through a world of swindlers, forgers, assassins and expensive call girls.