T1 – Tiffany launches a new collection during the quarantine…

Although all Tiffany & Co. stores in North America may be closed due to the global coronavirus pandemic, this does not mean that jewelry design has stopped. The New York-based jeweler is offering an antidote to the sense of uncertainty surrounding the general feeling of being in the lockdown with a bold update to its Tiffany T collection, entitled T1.

“The goal was to reinvent the T motif as a bold new symbol with a distinctly modern look,” said Reed Krakoff, artistic director,

The collection in diamonds and 18-carat pink gold features rings and bracelets adorned with the Tiffany T motif, with bold bevelled edges.

T1 is the symbol of a woman’s connection to herself, an emblem of personal power, according to the messages communicated by the brand.

The smallest 18-karat gold ring, without diamonds, sells for $850, while an articulated bracelet with two rows of brilliant-cut round diamonds weighing more than four carats sells for $28,000. “The stones are interlocking, like a honeycomb,” Krakoff said.

The expansion of the Tiffany T range was unobtrusively presented at this year’s BAFTA Awards, the British version of the Oscars. Charlize Theron wore a T1 jeweller’s choker for the occasion.

With much of the world in lockdown, Tiffany officially unveiled its T1 collection digitally in April, posting videos and images of its campaign on its website. It also promoted it on Instagram during the week of April 27.

Top models Vittoria Ceretti, Freja Beha Erichsen and Adut Akech are the stars of the campaign, presented in black and white, with the exception of the pink gold jewellery and splashes of Tiffany blue.

The videos show women as superheroes. A dynamic music reminds us of the good guys in comic books, slightly kitschy characters who fight crime.

Tiffany uses terms such as “empowering,” “independent,” “unshakeable” and “strong” throughout its T1 campaign on Instagram and its website. It speaks unequivocally to the consumer buying for herself.

As brands adopt a more sensitive and measured tone during the pandemic, Tiffany’s home page, as we write, exposes the T1 page with the words: “Courage. Strength. Optimism.”

The message is intelligently articulated around its theme of choice, that of personal empowerment and the strength to face difficulties, a subtle shift that takes us from the individual to the collective.

Tiffany has also worked on social networking content to connect with this audience. During the week of April 27, the brand launched a weekly Instagram Live series to coincide with the launch of T1.

Held every Thursday at 3:30 p.m. EDT, “T Time” featured a variety of creative people speaking from their confines about what has inspired them lately and answer questions from the audience about Instagram. The first guest was Cleo Wade, a poet, author, artist and activist who is very much in vogue with the Y generation.

The Instagram Live system, which allows users to broadcast their stories live – you guessed it – and remains available for 24 hours, has seen a surge in use as people are confined to their homes and practice social distancing. 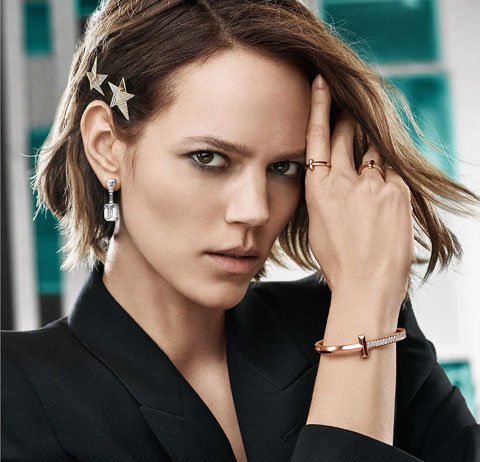